SOHS has been part of a heroic local campaign to save Teignmouth Hospital, the first purpose-built NHS hospital in the UK. After many set-backs, the hospital has been saved – for the time being – but without its in-patient beds, and with many clinics moving or being closed. Teignmouth is just the latest community hospital in Devon to be threatened with closure and to be robustly defended by SOHS. 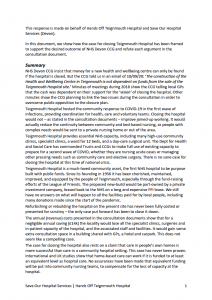 In October 2014 NHS England published its Five Year Forward View, which outlined so called new models of care for primary and secondary care across the country. Reducing hospital bed numbers was a central tenet of this plan, expressed in the concept of ‘care closer to home’ (in fact, care in your home, rather than in hospital). Teignmouth Hospital was one of the first hospitals in Devon to fall victim to this plan. In late 2014- early 2015 a consultation arrived at the conclusion that the hospital should have its minor injuries and acute beds closed. Although it was deemed necessary to keep 12 in-patient beds, they were mothballed in 2017. They were not restored and in 2018 plans were made to link a total closure of the hospital with the development of a new Health and Wellbeing Centre in the town centre; this new ‘hub’ is primarily for GP facilities.

This report dissects and refutes the arguments for closing the hospital and outlines the background. 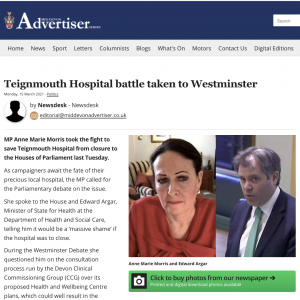 “MP Anne Marie Morris took the fight to save Teignmouth Hospital from closure to the Houses of Parliament last Tuesday.”

Read the article in the Mid-Devon Advertiser. 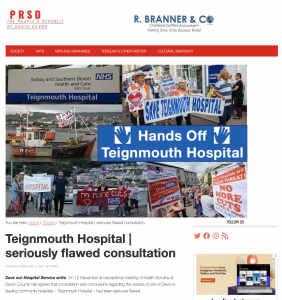 “Save our Hospital Service write, On 12 December an exceptional meeting of Health Scrutiny at Devon County Hall agreed that consultation and conclusions regarding the closure of one of Devon’s leading community hospitals – Teignmouth Hospital – had been seriously flawed.”

Read the article on The PRSD. 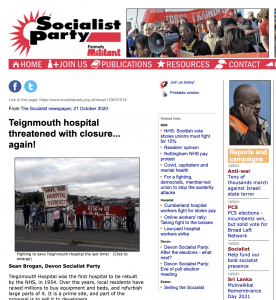 “Teignmouth Hospital was the first hospital to be rebuilt by the NHS, in 1954. Over the years, local residents have raised millions to buy equipment and beds, and refurbish large parts of it. It is a prime site, and part of the proposal is to sell it to developers.”